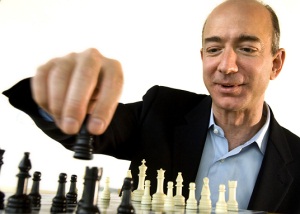 Amazon is not just a books, music, video, games and media retailer, it is the major online 'one stop shop' for many and one that has a cross merchandise offer that is very powerful and even threatens the likes of Walmart. If we take the latest UK news that they are increasing their take on of temporary UK staff for the Christmas run-up from 3,000 to 10,000 short-term packaging jobs in just three weeks, we see not only their commitment, but also their decisiveness to do business. How many retailers can you name who are taking on such numbers? Some 2,000 of the workers will also retain their roles after Christmas and join Amazon’s  growing 56,000 full-time worldwide workforce.

Amazon have also just announced that, Amazon Studios, has optioned its first novel, the Amazon-published, Southern horror 'Seed'. The book is a Southern gothic suspense tale of an "ordinary man with a demon on his back." It was authored  by Ania Ahlborn, under Amazon’s sci-fi, fantasy and horror imprint, 47North. The book is a self-published and a viral driven Amazon ebook bestseller. By developing Amazon Studios Amazon is now becoming a content developer with multiple channels to develop, promote and exploit content. This offers authors something that is truly unparalleled within the media market and could further fuel author deals that others will not be able to match.
Amazon Studios already claims to have optioned 10,000 movie scripts and 1,800 series pilot scripts, and although this number will reduce to a mere handful of projects such as 'Seed', the process and momentum is there for all to aspire to.
But Amazon's growth is not just driven internally and by themselves. Marketplace is further fuelling its 'one stop shop' environment and building on the realisation that books are books, be they new, old or used and being able to compare and buy from within one trusted store offers more than any simple comparison sight. Again Amazon have thought out consumer behaviour and matched their service to fit it. Many now have feed their catalogues into Amazon’s marketplace and are happy to get new sales and pay a commission on price paid and the postage incurred. This is without the many 'agents' who simply refer their sales to Amazon to fulfil.
Amazon’s growth is also being fuelled by the likes of Pogoplug who have launched an Amazon-powered cloud backup service in the US and UK. Pogoplug allows users to stream photos, music or video from their home computer to wherever they are in the world. Pogoplug mobile is a new device that allows users to access unlimited media streams from their mobile device using Amazon’s new budget cloud Glacier service for offering users low price fast cloud storage with prices around £19.99 a year for 100GB of offsite storage. Building a further trusted layer to many consumer relationships.
As Amazon continue their path to dominate many markets, they do have another side to their business face. They are giving back to one community around its fulfilment centre in Spartanburg, US by donating some 40 Kindles to the local School for the Deaf and the Blind. The students will also received $2,500 in gift cards to download resources to the new devices. The Kindles have a number of disabled-friendly features such as text-to-speech and large print and thereby obviate the need for visually impaired students to have wait for the audio book or large print edition.
Amazon is developing and creating its own ecosystem which is fuelling growth and is the only giant who not only understands the consumer but marries technology, media, retail and a thriving marketplace under one roof.
Posted by Martyn Daniels at Thursday, October 04, 2012