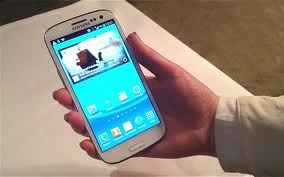 Smartphones are at one end of the spectrum and PC Laptops at the other with tablets sitting in the middle. You must have a phone and you take it literally everywhere and it’s seamlessly connected 24 x 7. The PC Laptop is like a mothership and is the hub especially in business. We may be the only ones to question whether the tablet will really replace the others or whether its real threat still comes from the smartphone?

Samsung has overtaken Nokia to become the world's best-selling mobile phone maker and remains the biggest obsticle to the iPhone dominance today. Samsung have just announced their latest model the Galaxy S3.

The device will continue to be the Andriod flagsjhip with the screen increasing to an impressive 4.8 inches. When we measured that increase against the existing Galaxy 4.3 inches the 22% increase, coupled with its Super Amoled (active-matrix organic light-emitting diode) display creates a definite Wow factor and just outsmarts the latest HTC One X. It leaves the 3.5 inch Apple iPhone 4S and the 4.3 inch Nokia's Lumia 900 looking somewhat small.

So is Samsung edging us towards the phone/tablet hybrid? Its first venture into that space, the Galaxy Note, has proved to be more popular than many had forecast and has given them a clear edge as they potentially converge.

We would buy into such a convergence and probably in 2013 it will be a reality.

The Galaxy S3 will be weighed down with value added extras such as; face recognition technology, an 8 megapixel rear camera and a 1.9 megapixel front camera for video, S Voice which is described as a "natural language user interface" similar to Apple’s Siri technology and the S3 can connect to Samsung TV wirelessly . The S3 also has Google's Android Beam (which can exchange data such as business card details) and is capable of sending a 1GB file between two S3 phones in three minutes, or a 10MB file in two seconds by touching them together. It comes in a 15GB or 32GB version, but Samsung are promising a 64GB model soon.

The Galxay S3 will be available in Europe at the end of May and initially in pebble blue and marble white, so watch out for them on a train near you.

Sorry - can't agree with your analysis. For me the tablet has replaced any need for a laptop. Like many professionals I still use a desktop for heavy duty desk work, but the tablet becomes the PC on the move. And the phone is a phone - my iPhone only just fits in some of my pockets as it is: any bigger and I'd need a bag to carry it, which defeats the 'always with you' requirement.

Brian personally i don't want desk top furniture so have long forgotten the desktop but use the Laptop as such and this enables me to move to between places. So i read desktop, pa, laptop as the same - a hub. The tablet is a nice gadget but seriously what do you do on the tablet you can't do on a decent smartphone. The 'like many professionals' is not accurate and demotes it to bling. I accept we need mobile devices but i would rather have an Airbook and a decent phone and forget the rest any day. is a

another way of looking at it:

Question if you could only have two out of three which would you loose?

Then add up the true cost of ownership of all three platforms and ask the question again and if you use mobile you should add in 3G costs or accept the limitations.

Martin - I think you will find most professional people working in an office (which is why I used the term) still use a desktop. They don't have a choice - it's what the company gives them.

I use my iPad for everything I used to use a laptop for - giving PowerPoint presentations, editing Word documents on the go (I can touch type on the onscreen keyboard), dealing with email - I can't do any of these successfully on a phone.

Of the three the one I would lose is the phone, because I don't actually need it to work (in fact I'd get more work done if I hadn't got it!), while I do need the other two.

Brian
we work differently and i accept your viewpoint its just not one i share. I would rather have an 'airbook' and it goes where i need to go for heavy duty stuff and i have my hub and a smartphone (i think the phone is still more important than a media player with add ons and can accommodate Facebook, linkedin, email, SMS and voice.) Lets beg to differ and watch the future unfold

The following is with kind permission of Joe Esposito (pub industry commentator, and consultant based in US)

Let's not just look at the device; let's look as well as the environment that gave rise to it. Apple manufactures brilliantly conceived integrated solutions, but as the environment evolves, more and more of the pieces that went into that integration can be supported by software. Apple has already hinted at this with iCloud, which makes individual devices less important. Look for disruption around personal, not local, area networks, where each individual has a tiny personal server that supports a network of devices from multiple manufacturers. Also think beyond media consumption; consider, for example, a mobile networked device that monitors your blood pressure in real time or checks that the level of medications in your bloodstream is at the prescribed levels. Microsoft is already developing networks like this for the home; we all have seen this in the office; several companies, not just Apple, are trying to do this in the Cloud. The personal network will mean that the devices themselves will become dumber, but we will have many of them, all connected. Thus one cheap screen for reading text, a larger screen (also cheap) for video, a link to the cellular network, a link to WiFi, networks. The tablet will be disaggregated. I don't know that Apple or anyone else necessarily has a locked-in lead here.

People are creative. The world did not stop innovating because Steve Jobs was a smart guy.