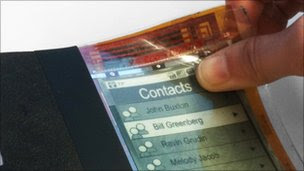 A group of researchers at the Human Media Lab at Queen's University, Canada and Arizona State University's Motivational Environments Research group have created an interesting flexible smartphone prototype made of electronic paper and in doing so have made their five year prophesy . The PaperPhone can do all the things expected from smartphones, make and take calls, send messages, play music or display e-books but also has the ability to triggers functions and features when bent, folded and flexed.

The prototype is millimetres thick and built on e-ink technology bonded to flex sensors and a touchscreen that interprets drawings and text written on it.
The PaperPhone prototype will be displayed at the Computer Human Interaction conference in Vancouver next week alongside a ‘chunkier’ looking device they called the Snaplet which changes its usage according to how it is flexed.

The team says they think flexible displays of this type could replace traditional smartphones within five to ten years.

Roel Vertegaal, the director of the human media Lab at Queen’s and one of the phone's creators, rather boldly claimed: 'This is the future. Everything is going to look and feel like this within five years.’ You hope that they can deliver it, the technology is sound and the market demand is real.
Posted by Martyn Daniels at Saturday, May 07, 2011