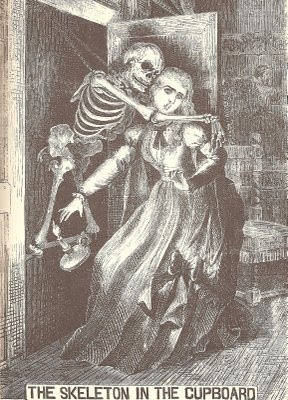 We talk one minute about bad PR and the next about skeletons in cupboards. When we discover one skeleton in a cupboard we deal with it and move on. When another is find another its only natural to raise more than an eyebrow.

Remember the millionaire brothers who rowed in this years Oxford Canbridge University Boat? Cameron Winklevoss, Tyler Winklevoss, together with Divya Narendra where co-founders of ConnectU, and took on their former Harvard classmate Mark Zuckerberg. They claimed that Zuckerberg the CEO of Socail Network Facebook had taken their software code and business plan. In 2008 they settled out of court for some $65 million in Facebook stock and cash. The dispute still rages on over the company valuation and some would suggest that there is there is no smoke without fire.

Now Mark Zuckerberg have had another potential skeleton in New York web designer Paul Ceglia. Ceglia has filed suit against Facebook and company CEO, claiming an April 2003 contract which would now entitle him to around 84% ownership stake in Facebook. The case is over a 7 year old contract signed by Zuckerberg and Ceglia, the designer. The contract is claimed to pay Ceglia some $1,000 and a 50% stake in the site. When it was nothing the 50% was worth nothing but today that could be substantial. The lawsuit also claims that Ceglia is entitled to "an additional 1% interest in the business for every day after Jan. 1, 2004, until it was completed." The terms apparently state, "It is agreed that Purchaser [Ceglia] will own a half interest (50%) in the software, programming language, and business interests derived from the expansion of the service to a larger audience."

Ceglia seeks a declaratory judgment and relief in the form of monetary damages and 84% ownership -- worth between $5.6 billion and $9.24 billion, which is based on Facebook's estimated value of between $6.5 billion and $11 billion.
Posted by Martyn Daniels at Friday, July 16, 2010