Having now written 400 entries in this blog we felt it appropriate to return to that often under reported and confusing issue of the US Orphan Act. We first raised this issue in the Brave New World report some two years ago and the Orphan Works Act of 2008 has since made progress through both the House and Senate. The Bill attempts to create a system where new creators can use old works without fear of massive lawsuits, provided that a good faith effort has been made to find out if the work in question is copyrighted.

Let’s remind ourselves of the problem that is trying to be solved.

You want to use a piece of old film footage or a photograph that contains no copyright information. You attempt to ascertain the owner but to no avail, so you use it, it is a success and then, comes the lawsuit. The picture might be an "orphan," one without a “parent” or copyright holder. After all artists die, publishers go out of business, some people never registered their work and it can often be impossible to locate the owner.

To qualify for this protection under the act, the new user must perform (and document) their "good faith" search and show that they could not locate them. They must file a "Notice of Use" with the Copyright Office and provide attribution about the original copyright owner, if they can find this information. They must also include a special "orphan works" symbol.

Lets step back from the legal implications and understand the massive issue that are at stake and the respective agreements from both sides.
First the statement made by The US Register of Copyrights, Marybeth Peters, to Congress in March this year. 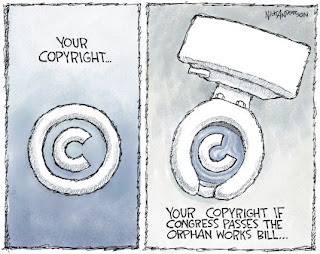 Second a blog by Nick Anderson, the editorial cartoonist with the Houston Chronicle in his blog last week and whose Cartoon captures his thoughts.

Technology is exploding the previous restrictions on how and what we could do with content in many forms. It is now bringing all the works ever written, drawn, painted, photographed, recorded and filmed to each and everyone of us. Many will be public domain and available to be used, others will be still available and clearly defined in terms of ownership and there will be many, some would argue the majority, that live in a grey area where ownership is unclear or not easily resolvable. Today one of the greatest challenges to digitisation on even current works is that not all rights can be digitally cleared against a work. So it is fair to assume that going back is going to get murkier.

We may not agree with all of the agreements from either side but in a world where land grabbing is often the norm and creator earnings are not guaranteed we should always focus on the side of the creator.
Posted by Martyn Daniels at Saturday, May 17, 2008