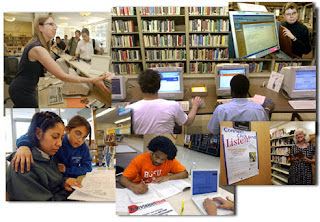 We read from Reuters that according to a survey just published by Pew Internet & American Life Project, more than half of Americans visited a library in the past year and that the biggest users were young adults aged 18 to 30!


Importantly libraries are seen as a community and neighbourhood centre, a gathering place. It is interesting that when we first saw the entrance of the large B&N stores with their cafes and reading areas we felt they were a threat to the libraries and would become the neighbourhood hub.


In an increasingly digital environment it is easy to envisage the role of the library moving as many have predicted into the information centre. However the really interesting areas are remote borrowings and print on demand. If you live in New York and register you can borrow digital books online and never step inside the library. A number of the larger libraries are stating to explore print on demand using technology such as Espresso.


So why pay for an ebook when you can borrow it online? Why use an internet café when the library has one for free? Inter library lending is simple in the digital world so the title is never not available.


In his 2008 predictions, our good friend and publishing commentator, Mike Shatzkin of the Idea Logical Company states, ‘Sales of books in electronic form to public libraries will continue to grow’. Interesting times for library funding, strategy and for publishers.
Posted by Martyn Daniels at Tuesday, January 01, 2008