Four days to a New World 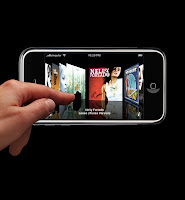 On Friday it happens! The iPhone launches in the US and is set to be a landmark shift in the convergence of technology, content and design. AT&T-owned stores will close early at 4:30 p.m. and reopen at 6 p.m. to sell the iPhone for the first time. Some Apple stores are not planning a pre-6 p.m. shutdown before the iPhone goes on sale. Still, other Apple stores did say they were going to shut down as they got ready for the onslaught of want-to-be iPhone customers to fill their stores. Proving that its not just Potter that gets the queues.

Before its hits the streets content providers are recognising that we are moving from the often clunky presentations of web offers over the mobile networks to one which mirrors the online world, is slick and potentially one that will define much for the next phase of mobile evolution. Steve Jobs and the Apple team come at it from a different perspective. They have designed their own application so consumers can receive YouTube videos through a Wi-Fi network and this could lead to even more consumers bypassing traditional networks altogether.

This will not be Mr. Jobs’s first experience in redefining an industry. Many hailed Mr. Jobs as a saviour when the iPod was introduced in 2002 because it was an alternative to the illegal online music sharing. Three years later, the music bosses are deriding him over pricing. But let’s get real, he was not to blame for their ‘head in the sand’ attitude to pricing, but merely exposed the price point needed to engage the consumer.

Now the major film studios are cautiously resisting Apple ’s overtures to put movies on the video iWorld. They want guaranteed copyright protection and reduced prices. The reality it will be dictated by the consumer and the likes Jobs. When it happens it is obviously better for the film studios to be inside the tent than outside.
Imagine what Jeff Bezos is thinking as he prepares to launch his Amazon/Mobi reader? Will it end up like that much hyped but doomed from the start Sony ebook reader which failed to capture the consumer’s imagination or find real content. It is hard to see it capturing the same level of hype as Apple’s iPhone.

Many are merely waiting with open mouths for Friday and a ‘New World’ start.
Posted by Martyn Daniels at Monday, June 25, 2007