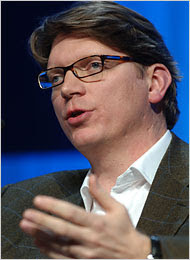 There are two people who more than most helped shape the Internet ‘free’ world we live in today. It was definitely not Jobs and Gates or those Google guys Page and Brin nor Napster’s Parker and Fanning but Niklas Zennstrom (pictured)and Janus Friis. This Scandinavian team not only gave us Kazza and arguably the second generation of P2P music but went on to create Skype and redefine how we all communicated. Now they have appeared again with their latest venture ‘Joost’.

But this time they are not pushing the legal boundaries but doing everything by the book. Revenue-sharing agreements have been signed and licenses have been granted.

Today Friis and Zennstrom work out of Skype’s offices in London. Although they sold Skype for $2.6billion to eBay in 2005, they remain active in the company.
Joost has struck a major deal with Viacom which gives Viacom a degree of control over its programming that it has not enjoyed from the likes of YouTube and also a platform they claim is piracy-proof. Only this month , Viacom demanded that YouTube, remove more than 100,000 clips of its programming due to the lack of licensing and revenue sharing agreements.

Technology convergence between the various video, TV and visual platforms is certainly coming fast but because is built with this in mind it could present the ‘tipping point’ that changes how consumers watch TV and videos on the Web in the same way the Skype redefined voice over internet.

Certainly one to watch!
Posted by Martyn Daniels at Tuesday, February 27, 2007