A Day at the ebook Races 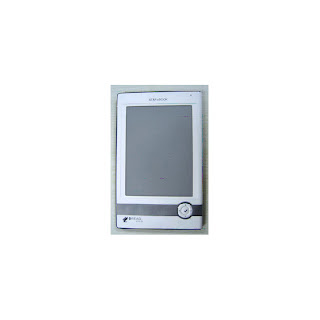 Another ebook reader STARbook is to be launched in Taiwan by China-based eRead, a Chinese language electronic book distributor. The portable reader features a 6-inch e-paper screen and is only 0.8cm thick and weights 176 grams with a battery life of more than 8,000 continuous page turns, uses Prime View International's (PVI's) electronic-paper (e-paper) display and is already available in China.

By next February, eRead aims to ship 5,000 units with a global projection of 60,000 units in 2007. Sony’s rival e-book reader, which was launched in October in the US market also uses PVI technology, is currently believed to be shipping around 10,000 units per month. PVI have also recently announced that they will be upgrading their e-ink display manufacturing to around an annual production of 720,000 units.

This uplift obviously indicates a growing confidence in ebooks and the role that e- ink display based e-readers could have in the market. However as we indicated in our previous article ‘Brand new screens for ebooks’ on 4th December, will this technology be displaced by the new OLED (Organic Light- Emitting Diodes) technology?

Alternatively imagine rolling up your electronic reader and sticking it in your coat pocket with a customized news feeds stream into it. The US newspaper company Hearst Interactive Media Group President Ken Bronfin envisions a prototype will be about the size of letter size paper starting next year. “It’s somewhere in between a Web and a newspaper. The device brings the best of both worlds with portability and up-to-date and personalized news. It’s not the Web.”

The Hearst reader could serve as the repository for documents and books in addition to newspaper content. It offers the newpaper sector potential significant cost savings and once in volume production, the electronic ink reader will be around $200, says Bronfin. “Newspapers would subsidize the cost of the readers the way cellular companies subsidize the handsets.”

The underlying technology of Hearst’s reader is E Ink Corp.’s electronic ink, they are one of two American newspapers companies that invested in E Ink. It has been suggested in the media that the Hearst reader will come from UK based flexible display pioneers Plastic Logic.

What is clear is that screen technologies are moving and device usage is converging fast. There is a growing number of players entering the market and a growing awareness in the consumer market.
Posted by Martyn Daniels at Friday, December 22, 2006