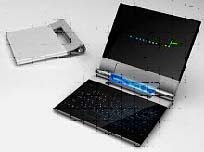 For many years the major problem was backlight screens, you just could not read them in daylight. We all assumed the answer would be eInk. However today there is potentially a new technology that is being developed that may solve the backlight problem and importantly is one being looked at by other industries. In this rapidly converging world it is hard to see a single application technology prevailing if others can match it offer more and most importantly are being adopted by others.
Today we learn that Korean electronics giant LG has just unveiled a concept ebook device that uses an extremely sharp high resolution full colour OLED (Organic Light- Emitting Diodes) display and an ultra high-tech fuel cell power supply. http://www.digitalpublishingnews.net/ report that the ebook has just won a "best of the best" Red Dot Award, a German prize for industrial design.
So what is OLED and why is it different? Basically, it's a low-voltage display technology that uses organic films sandwiched between an anode and cathode to produce red, green, and blue light. The difference to plasma display panels and TFT LCD displays is that OLED displays don't require a backlight, consume less power and can result in thinner screens than the liquid-crystal displays, or LCDs. The market appears to be that for small, handheld electronic devices. There are hundreds of millions of these gadgets out there that need bright, color displays with clear contrast, and by coincidence, the smallest OLED screens will be the easiest to manufacture.
Pioneer have announced a project to produce displays made from OLED in the first quarter of next year. The screens, which will start to come out in March, measure 2.4 inches across, come with a resolution of 240 pixels by 320 pixels and will have an active life of more than 10,000 hours. The screens will be capable of projecting 262,000 colors.
So who will by eink and who will buy OLED? My bet would be on the later and by the time the market starts to shake I would bet on convergence over single usage technology.
Posted by Martyn Daniels at Monday, December 04, 2006