'The Times They Are A Changin' 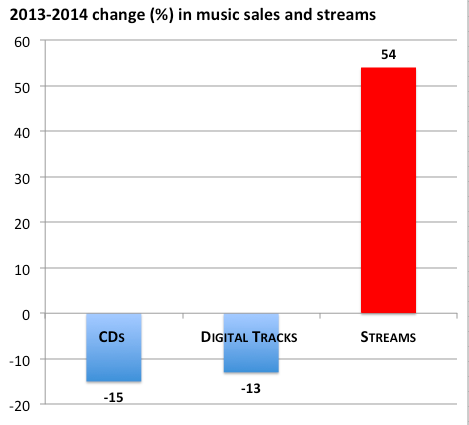 We see many changes at the consumer end. Technology has replaced the preceding technology. Eight track was replaced by cassette, cassette was replaced iTunes, iTunes downloads was usurped by MP3 downloads, which is being replaced with streaming on demand. This is without the parallel evolution from MTV to YouTube and the growth from digital internet radio stations and music discovery services such as Shazam.

Music owners have in the past been forced to replace their collections, but the new streaming technology now questions why they would want to reinvest yet again when it’s all available on demand. On demand is itself is fuelling subscription. The changes are logical but the speed of change is significant and the redefinition of ownership has enabled many to rediscover vinyl whose sound was of a higher quality, but its market share is still only 3.5%. When we first started this blog we thought Spiral Frog would capture the new market, but they failed to cross the line and their place was taken by Spotify.

Spotify now claim 35 million songs on their service and there are many more renditions now on services such as YouTube and SoundCloud. But even with this enormous repository of songs many still go unheard whilst others, like butterflies have one season in which they flourish.

When you look at the production, distribution and business, change is often less revolutionary and more evolutionary. Social networks and self-promotional marketing are starting to eat away at the mid list. Unless you are in the top 1% which generate 80% of the money, then you may have to rely on the hit makers which now are TV driven by talent shows such as The X Factor, The Voice, Pop Idol.

To be a hit, you now need serious financial backing, or social pull. With these changes come changes in the reward structure for all. Some will say that there are now too many sticky fingers in the diminishing pot. So artists are having to rethink the old models and balance greater control and percentage of revenue, against lower revenues and often chump change return. A good friend and musician commented to us only this week that selling direct gave them 100% whilst scattering to the digital unknown gave them little. Merchandise, concert revenues and secondary rights are growing in importance. This impacts how artists are managed, make money, record and distribute. It changes where the producers and labels make their money and the increases the importance of the back catalogue and Intellectual property.

So can books learn from music?

The consumer end is very different and what is clear is the physical book isn’t going away in all sectors and will retain a major share of the market whilst the distribution economics can support it. However, like music the pot is not growing but changing and this is putting similar strains in the production and development area of the value chain. There are many similarities here with respect to back list, mid list and front list and self-publishing. Even signed authors are having to work harder on their social skills as publishers rein in the marketing and promotion to focus on the best shots.


The one thing that all media segments share is the polarisation of value at either end of the value chain and reducing influence of the middle to many.
Posted by Martyn Daniels at Tuesday, January 27, 2015