The World according to Bill 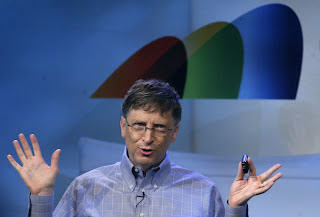 The prophet came down from the mountain at Microsoft's Strategic Account Summit in Seattle. Of course there were tablets (digital) and there was the controversy one would expect at such an event. So what did Bill say:

"Reading is going to go completely online.” However, he appears to be more focused on the obvious; newsprint, reference and advertising related materials and of course the technology, “somewhere in the next five-year period we'll hit that transition point, and things will be even more dramatic than they are today." Nothing earth shattering there then.

Television will change from a simple broadcast to a targeted medium. Again nothing earth shattering and looking at players such as Joop are clearly showing the way. He says, “ads will be targeted, not just targeted to the neighbourhood level, but targeted to the viewer. ... We'll actually not just know the household that that viewing is taking place in, we'll actually know who the viewers of that show are, and so it's a very rich environment." Reminds one of Big Brother.

On printed newspapers: "The media itself will be quite, quite different. Who can create this media, who can distribute it? How do you find what you're interested in?” No answers here just more of the obvious.

On print newspaper advertising: "The Internet is like a lot of things -- the only sure winner, with the breakthroughs, are the consumers themselves." Is he going to say anything exciting and fresh?

Well I wonder what the audience thought to this. It is ironic as one leader announces his retirement from the political stage another technology leader clings on to his mantle and refuses to go quietly…
Posted by Martyn Daniels at Friday, May 11, 2007