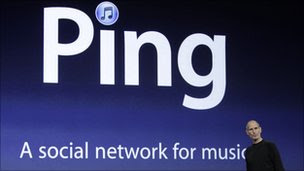 The world of social networking just got a new player. Apple has launched Ping, a social network based on the latest version of its iTunes software and focused on music.

Ping, builds networks of music lovers artists and aims to step into the musical shoes of MySpace. "It's a social network all about music," said Mr Jobs, on its launch in San Francisco."We think this will be really popular very fast because 160 million people can switch it on today," he said.

Apple believe that because they are already where many are buying music that Ping is a natural extension. The question however is whether the social aspect is better suited to music sharing and artists wishing to post material up to be found. Ping assumes Apple is music and this extension is a natural pull but they may be wrong Jobs billed it as a new way to discover music but maybe only if you want to buy it.
The service allows users to create their own profile on iTunes, lists friends lists and what they are listening to and concerts they attend. But is this what buyers want or is it assumption too far?

Ping will have to compete with not only Facebook, MySpace and You Tube but also the likes of Spotify and Last.fm. Not there businesses are about selling music so there may be some trick even Apple have missed.
Posted by Martyn Daniels at Wednesday, September 01, 2010