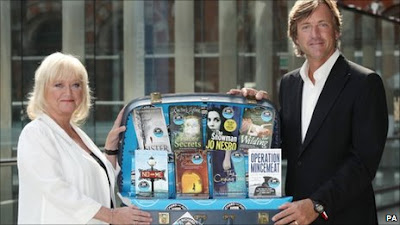 Celebrity payola is back and they appear to be queuing up to cash in on their names and brand.

In the US Oprah Winfrey is about to make a book club comeback with her sticker going on books on September 17th . The books will of course be brand new hardbacks.

Meanwhile in the UK it appears we can’t get rid of Richard and Judy, who are bringing back their Book Club in yet another guise. On the same day the Book Club returned the duo have also categorically ruled out a return to daytime TV on which they last appeared with their Book Club mark 2 on the digital channel ‘Watch ‘in 2009. The second time they failed to capture the audience and saw their audience dropped as low as 8,000. Having worked together for 21 years on TV they have now said they had no plans to come back to television, either together or apart. Perhaps they are past their TV sell buy date?

However not only have they turned their backs on TV they believe the brand is so strong that they can exploit it even without the TV audience, celebrity couch and media attention. They honestly believe that their sticker on a book on the High Street is enough, they even have done a deal to make it an exclusive to WHSmiths. Some would suggest this is vaniety to the extreme others that the public will remember the duo and like sheep follow the two everywhere.

It is unclear what the commercials are but some would suggest someone has to pay and they aren’t doing it for free.

So we now have bypassed literary review and ignored peer review and like everyone else believe celebrities know best. Would a Jordon, Simon Cowell, Cheryl Cole, Wayne Rooney or Peter Andre sticker sell books. We already have ghost writers so why not ghost reviewers and endorsers? Why not the Del Boy Trotter Book Club which would go well with the image of Richard and Judy and the suitcase.

Madeley and Finnegan will review a book every two weeks and post their reviews online, alongside interviews with the authors and reviews from book lovers across the UK. But what is the point and why is it exclusive to WHS? Is this the same WHS are discounting the 'Blair' best seller?

Remember that other recent celebrity book review programme with Jo Brand, Gok and company? Do we now just believe a celebrity book endorsement is the difference between success and failure and forget the content?
Posted by Martyn Daniels at Thursday, September 02, 2010