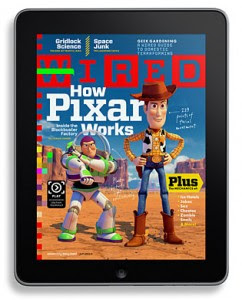 Wired magazine has to many been the guiding light informing many as to the opportunities and challenges of our new digital age. Its somewhat ironic that although it has had the Wired.com website it has only just embraced the mobile digital app. Some would suggest it failed to practice what it preached. That is until now.

Wired’s first digital edition is now available for the iPad. They have chosen to use Adobe technology to develop both the print magazine and the enhanced digital version simultaneously with the same set of authoring and design tools. They also plan to integrate social media and experiment to learn what their readers want.

As Chris Anderson, Editor in Chief puts it Wired is finally, well, wired.
Posted by Martyn Daniels at Monday, May 31, 2010