We naturally assume that the Japanese market is far more advance digitally than the West but that is not the case. The lead that they have show in Keitai novels and Manga comics may be ahead of the curve but there are salient lessons to be learnt there. The Japanese market itself is defined differently with magazines, books and comics often all together within the same channel and and figures. In 1997 the market was some $30 billion US, today it is under $20Billion, so in just over 10 years it has shrunk 30%.

Japan has a fixed price system which is controlled under a network of wholesalers. The major publishers are currently experiencing a continual downturn in both sales and profit and most marked is the drop in comic book. Bookstores over the last 10 years have dropped by 20% from around 21 thousand to 16,400. 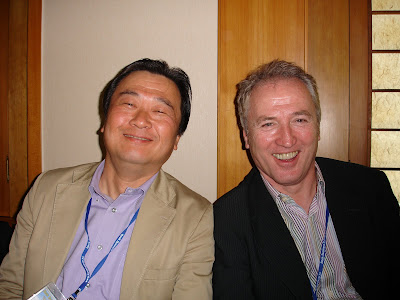 So will the new digital age stimulate the market or cause further collapse? Will it open up trade just as Commander Perry did with his Black Ships some 150 years ago?
We listened with interest to Hiroshi Kagawa, Publisher and owner of IBC Publishing at the recent Seoul International Book Fair.

One aspect that we didn’t respect was the Asian approach and attitude to copyright and how it differed to that in the West. Kagawa talked about the obvious issues he faces operating in a country with 50 years rules and a global market that has 70 year ones. Most interesting was his insight into contracts and the fact that they are drawn up after the publication not before, are based on a few principles and not buried in detail and specifics and that they are based on relationships. He asked whether Japan could manage the transition to the contract world of the West and if not the potential implications.

However they appear not to be waiting for the Black Ships and Kodansha, a major publisher, is planning to create 20,000 e titles this year and already have some 7,000. Major publishers have formed an association of epublishing called Denshokyo.

Kagawa closed by stating that we have created a digital tangled web where we are in danger of loosing the reader. He believes we need to find new ways of untangling the web and creating simpler and short digital entry to content. ‘In a digital era we may lose our patence and endurance to read heavy content.’
Posted by Martyn Daniels at Friday, May 21, 2010