Rabbits are cute little fluffy animals that we all love. They often bury away underground and unseen and then you see fields of them. So it was interesting to read about rabbit that had obviously been hidden from ourselves, the Nabaztag Rabbit, which was covered in an article this week in the Bookseller bulletin.

Violet, are the French creators of the WiFi Nabaztag techie Rabbit first launched it in 2005. You simply plug it into the mains, connect it to your wireless hub and give it a name and its alive. Through its internet connection it can, relay alerts, news, podcasts, radio, messages and even read SMS and email. It takes orders and can give them too! Friends can even email the rabbit! Its ears rotate and ‘practice Tai chi and it speaks 5 and can read 16 different languages. It retails from many outlets at around £80 and appears to be a very clever little bunny!

The Nabaztag can also identify and react to tags via its "Ztamp" system. This enables Ladybird to bury a Ztamp in the jacket of a childrens book which when placed in fron t of the Rabbit will enable him to retrieve the story from the Violet server and reads it out loud. Users can even navigate through the chapters of the story by moving the Rabbit's ears! From September, the Rabbit will be bundled with three traditional Ladybird Tales for £115. Alternatively the stories can be bought separately online.

Now if it’s a toss up between this little ‘toy’ and the kindle we know what we want for Christmas and we can get it from Amazon with different coloured ears! 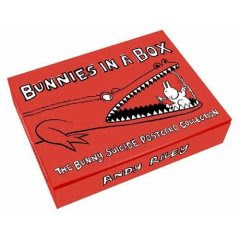 Rabbits are fun and ironically this week my wife gave me a box of postcards ‘Bunnies in a Box’ by Andy Riley which she had reviewed for her business. This was dark humour at its best with a collection of hilarious and outrageous cartoons of images of fluffy bunnies finding new ways to commit suicide. But somehow we don’t see the Nabaztag Rabbit committing suicide any of the ways depicted.
Posted by Martyn Daniels at Thursday, August 14, 2008

With Nabzone and your nabaztag, you can play lot games such as :

Nabaztag Love Test
Ask your Nabaztag if your dream partner loves you.

The translator Rabbit
Enter a short text; the Rabbit will say it to you in another language.
Nabaztag translates from French to English and vice-versa...

Magic 8 Ball
Ask the Nabaztag a question, give it a shake and then wait the 'Spirit Slate' voice for the answer... A divination tool that mysticaly answers your questions.

Telepathy Game
Intuition or telepathy ? Discover the card chosen by your Nabaztag and develop your telepathic potential.

Biorhythm
Module generating a textual message and 'choreography' according to you current biorhythm.

Nabaztag Goofy vs Regular
To know the real pattern of your Nabaztag. Is your Rabbit Goofy or Regular?

Nabgo : The Rabbit Bingo
Play Bingo with your Smart Rabbit. Download and print your own bingo cards and your Nabztag will be the Bingo MC. One line win !

Twister
The famous 'Twister' game to play with your Nabaztag. Nabaztag spins the spinner, and you move your body !

Memory Game 'Simon'
The famous 'Simon' game to play with your Nabaztag, replay the color sequence played by your Smart Rabbit. The memory game to test your concentration.

Nabaztag knows alphabet
A little game for young chidren : Nabaztag chooses a word, writes it, says it and ask a little question about it.

NabMessenger
Basic module to send a 'Wink' - short luminous and sound message - or a textual message that will be read by your Rabbit's synthetic voice.

But also... Nabzmood
Communicate your mood thanks to your Rabbit.
This service offers to display on your Website a little picture that indicates in real time your mood.

And the Rabbits'GoogleMap,
Nabaztag Widgets,
No more naked smart bunnys: Clothes to print, cut and put on your Nabaztag...